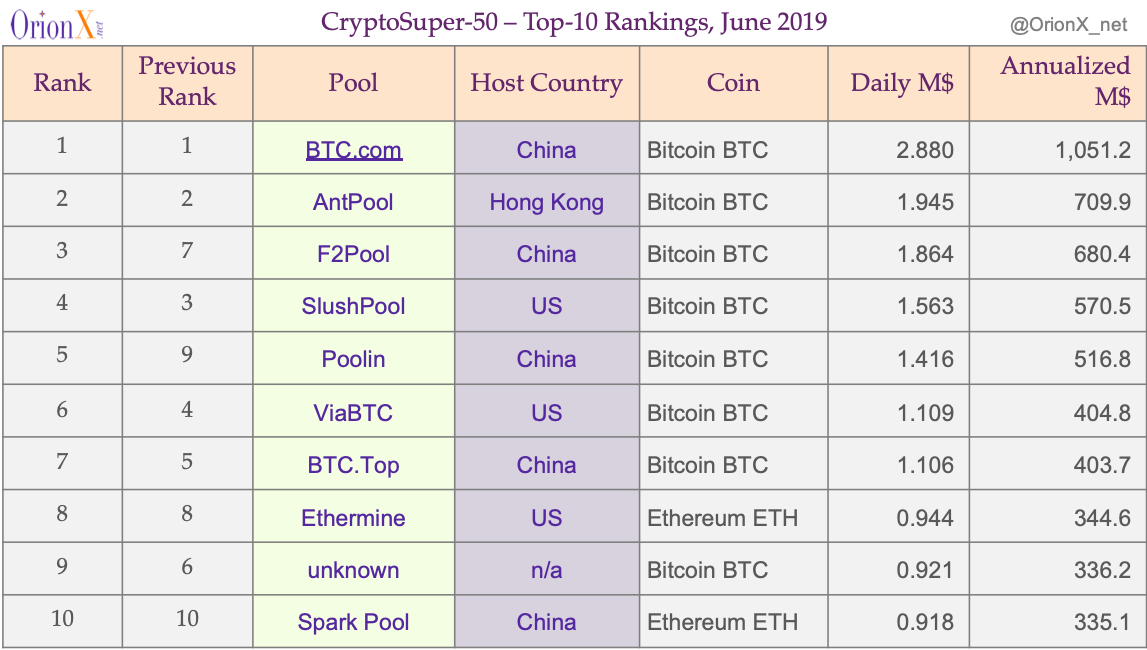 Inspired by the TOP500 list, biannual list of the most powerful cryptocurrency mining pools tracks compute power and economic value
MENLO PARK, Calif. - illiNews -- OrionX Research today released the second edition of its CryptoSuper500 list. The list recognizes cryptocurrency mining as a new form of supercomputing and tracks the top mining pools. Cryptocurrency technologies include blockchains, consensus algorithms, digital wallets, and utility and security tokens. Aided by a recent surge in cryptocurrency prices, the top 10 mined coins have market caps above $0.5 billion dollars, and the #1 coin, Bitcoin, as of our snapshot taken on May 30, 2019, had a market cap of $154 billion.

Cryptocurrency Supercomputing refers to large-scale cryptocurrency mining operations which are typically powered by accelerator technologies such as GPUs, FPGAs, or custom ASICs. Bitcoin is the most notable of such currencies. Cryptocurrency mining via Proof of Work is important since it continues to represent the most effective consensus algorithm to maximize security in a decentralized manner.

More on illi News
The annual economic value (AEV) of the top 5 pools in the current list compared to the last list (published in November 2018) are as follows:
ViaBTC in the US and BTC.Top in China were among the top 5 in the previous list and have been edged out by F2Pool and Poolin in the current list.

The eight coins mined with Proof of Work consensus algorithms and that made the cut for our analysis are
All except Monero require ASICs for efficient mining. Only Bitcoin and Ethereum mining pools are found in the current top 10.

The full list with additional explanation is available in a slide presentation at OrionX.net/research.

"The traditional data center is becoming a supercomputer center," said Shahin Khan, OrionX Partner and Analyst. "Corporate IT departments increasingly rely on versatile supercomputers as the engines of digital transformation. Green500, IO500, CryptoSuper500 and similar competitive lists point to the versatility of supercomputers and the need for supercomputing in Fortune 500."

More on illi News
About OrionX
OrionX is a Silicon Valley firm with a new model that combines technology research, market execution, and customer engagement. More than 60 technology leaders in virtually every technology segment have trusted OrionX to help set new break-away strategies, ignite brands, and grow market share. Visit us at OrionX.net.

* Note: This effort is an analysis of the technologies and trends surrounding blockchain and cryptocurrencies. It is not, and must not be considered as, financial, investment, or legal advice.