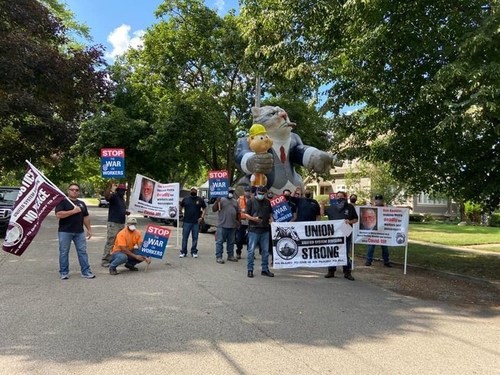 METRA is the Chicago area transit system and its workers have been deemed essential and required to risk their life to ensure that the transit system functions during the pandemic.  However, despite being essential workers, they have not had a raise since 2018 due to CEO Jim Derwinski's reckless behavior in union contract negotiations. Rail Labor calls on CEO Derwinski and the METRA Board of Directors to bargain in good faith with union workers and reach a fair settlement in contract negotiations.

METRA workers and their union representatives will demonstrate in front of the METRA Board of Directors meeting on November 12 at 547 W. Jackson Blvd., Suite 1400, Chicago, Illinois 60661.   Nine Unions representing 2500 Metra workers have joined together in a bargaining coalition to demand a fair contract from METRA management.

More on illi News
"Frontline railroad workers at METRA have not had a raise in 3 years," said METRA Conductors leader Chip Waugh. "With the cost of living skyrocketing in recent months, METRA management needs to come to the table and provide relief for struggling families."

The nine railroad unions representing at METRA have been negotiating with management since January 2019. During this time, METRA has received massive financial support from the Federal Government which the METRA Board of Directors has spent on 4% and 17% increases in executive compensation while frontline workers have received nothing. CEO Derwinski's pay recently went from $285,000 to $305,000 effective January 1, 2021 and another bump to 340,000 effective January 1, 2022.

"While we would prefer that METRA management bargained in good faith, we can't go on like this forever," said Matthew Hollis, Vice President for the Rail Clerks (TCU). "The riding public should know that if management does not reach a settlement with us soon, we will strike at our earliest opportunity."

SOURCE Brotherhood of Maintenance of Way Employes Division of the Teamsters
Filed Under: Business
0 Comments
Latest on illi News