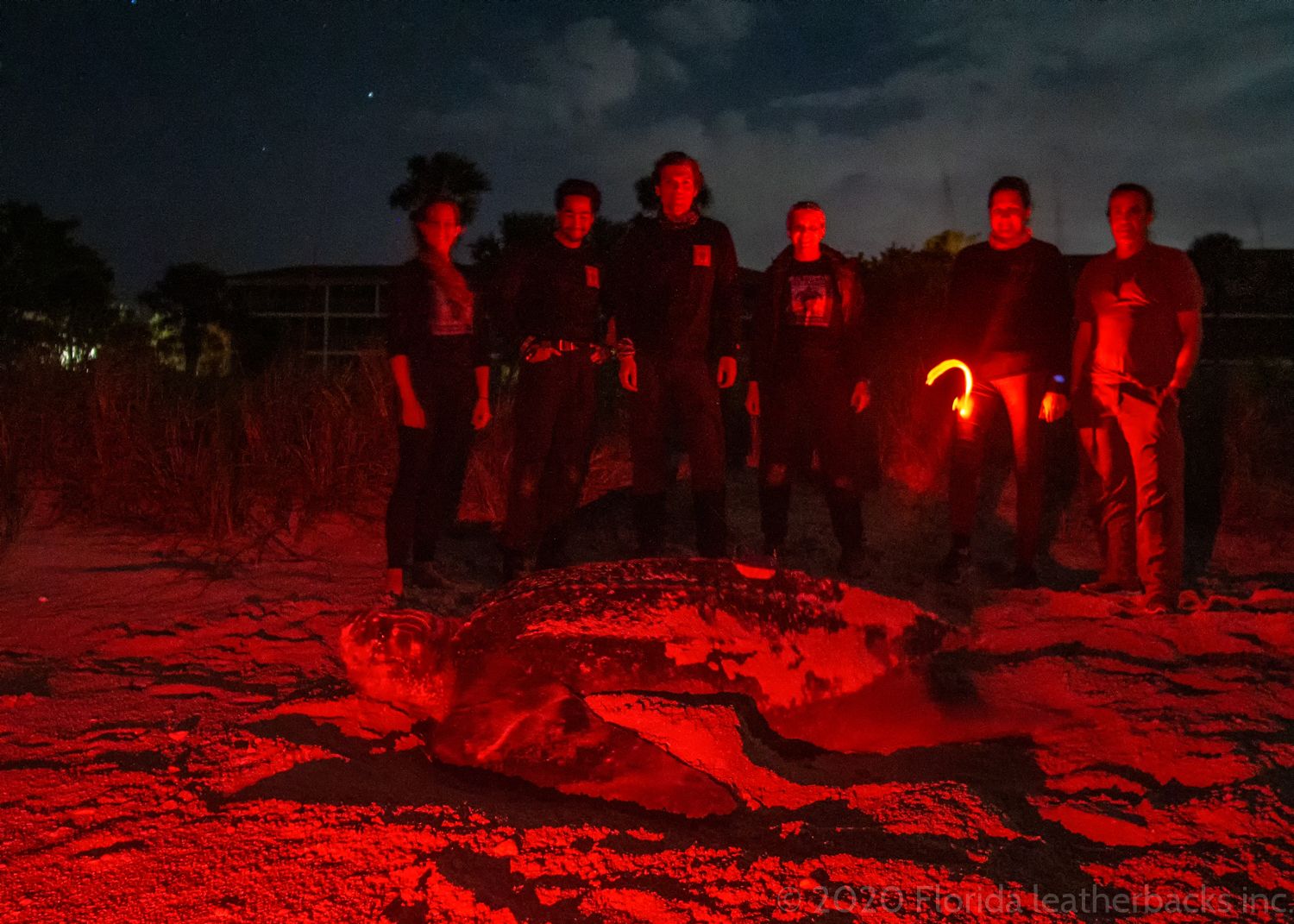 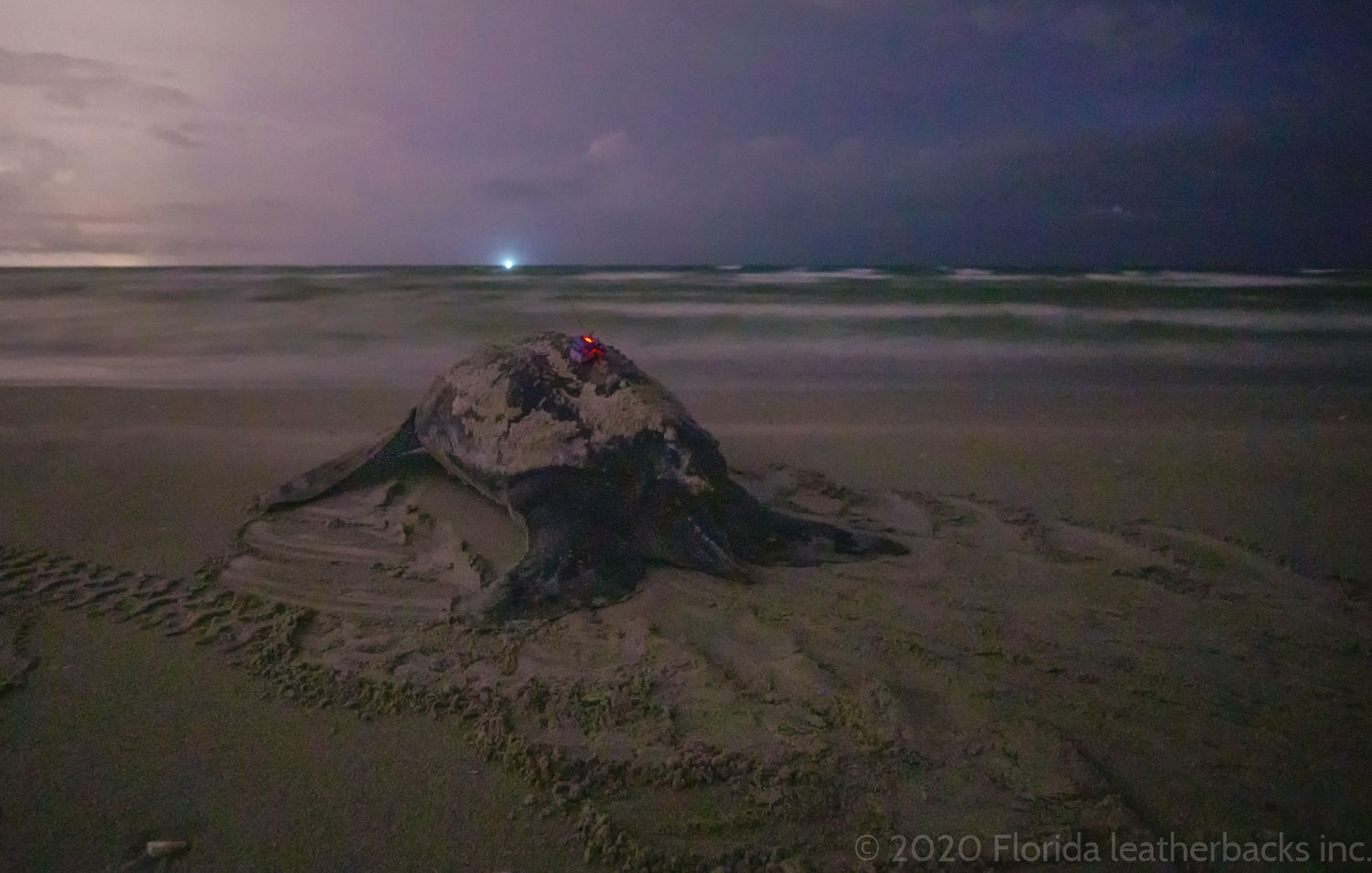 After laying several nests earlier in the season, a team of biologists has encountered and tagged a rare leatherback sea turtle that is nesting along Sanibel and Captiva Islands. She can now be tracked in real time as she travels the southwest Florida coast.
SANIBEL ISLAND, Fla. - illiNews -- On April 1, 2020, biologists with the Sanibel-Captiva Conservation Foundation (SCCF) discovered a rare leatherback sea turtle track on Sanibel Island. Over the next few weeks, they recorded several nests on Sanibel and Captiva that indicated that they were likely laid by the same turtle. On the night of May 10th, the research team was able to observe this turtle nesting while conducting their regular nightly tagging surveys. Their team decided to name this turtle "Juniper." She is an average size leatherback measuring 152.5 cm in curved carapace (shell) length and 111 cm curved carapace width.

Leatherbacks very rarely nest on Florida's gulf coast as they prefer southeast Florida beaches along the Atlantic Ocean. SCCF Coastal Wildlife Director, Kelly Sloan, saw this as an opportunity to learn more about this turtle and reached out to biologists with Florida Leatherbacks Inc (FLI).

More on illi News
FLI is a nonprofit dedicated to researching leatherback turtles that nest on the east coast of Florida. Sloan coordinated with Chris Johnson and Kelly Martin with FLI who made plans to travel to Sanibel and Captiva in an attempt to encounter Juniper and place a satellite tracking device on her. Kelly Martin said, "This was an amazing opportunity to track a leatherback from a location never before tracked and gain valuable research data about her behavior and movements in the Gulf of Mexico."

Based upon timing between nests, FLI biologists believe that Juniper may have already laid six nests this season. On May 19th, a team from FLI and SCCF found Juniper nesting once again on Sanibel Island and they were able to place a small satellite transmitter on her carapace. The batteries in the transmitter have the capacity to transmit for as long as two years, but FLI biologists realistically expect to be able to follow Juniper for 9-12 months.

This transmitter will allow FLI to track Juniper, locate additional nests if she nests again, and follow her travels after nesting season is over. Chris Johnson with FLI said "Satellite tracking technology is an amazing tool to count and identify sea turtle nest locations. In 2018 we identified as many as eleven nests from a single leatherback utilizing satellite transmitters."

More on illi News
Since tagging Juniper, she has traveled approximately 100 kilometers and is currently located 42 kilometers south of Sanibel Island. Kelly Sloan said, "This collaborative effort was a huge success! We are so excited that we were able to take advantage of this unique opportunity and learn more about leatherbacks that nest on the gulf coast. Thanks to FLI, we will now be able to follow Juniper as she swims off Sanibel. We are looking forward to seeing if she nests once again or if she's ready to head to her foraging grounds."