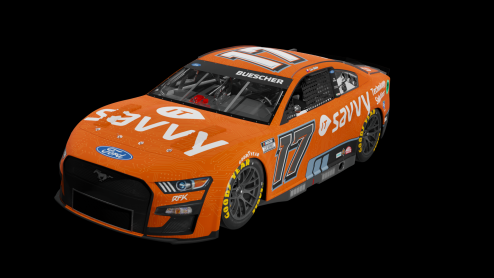 CHICAGO - illiNews -- ITsavvy, one of the fastest growing complete technology solution providers in the U.S., has announced the first of two race dates for Roush Fenway Keselowski (RFK) Racing's No. 17 Ford Mustang driven by Chris Buescher. This season marks the second year of the ITsavvy/RFK partnership.

ITsavvy will first appear on the No. 17 at Phoenix Raceway on Sunday, March 13. The race will air live on FOX at 2:30 PM ET. In 2022 NASCAR launched into the "Next Gen" era, featuring its seventh generation car design, implemented to improve the level of on-track competition, while allowing for more cutting-edge technology.

ITsavvy CEO Mike Theriault said, "We are excited about the new racing season and our continued partnership with RFK. Top performing technology, whether it's a computer or a racecar, relies on high quality components that deliver speed to results - that's what our clients expect from us and what RFK delivers on the track."

In 2021, Brad Keselowski - one of the top NASCAR drivers - joined the Roush Fenway Racing team as both a driver and co-owner, piloting the famed No. 6 Ford Mustang in the NASCAR Cup Series. With the ownership addition, the team rebranded its organization to Roush Fenway Keselowski Racing combining three iconic names in Jack Roush, John Henry (Fenway Sports Group) and Keselowski.

More on illi News
"We're thrilled to continue our ITsavvy partnership," said RFK team president Steve Newmark "We are pleased they continue to support our team and utilize our platforms in their marketing efforts around the sport. We're really looking forward to sporting their colors again this season. We will be looking for a strong run in the ITsavvy No. 17 Ford Mustang."

ITsavvy will again be featured on the No. 17 Ford the following week at Atlanta Motor Speedway (Sunday, March 20), with the race broadcast live on FOX at 2 PM ET.

More on illi News
About Roush Fenway Keselowski Racing
Roush Fenway Keselowski Racing (RFK) is one of the most successful teams in NASCAR history, fielding multiple teams in the NASCAR Cup Series. In its 35th season in 2022, RFK is a leader in driver development, having launched the careers for many of the top drivers in the sport. Off-track, RFK is a leader in NASCAR marketing solutions, having produced multiple award-winning Social Media, digital content and experiential marketing campaigns. RFK is co-owned by NASCAR Hall of Fame team owner Jack Roush; Fenway Sports Group, parent company of Major League Baseball's Boston Red Sox and English Premier League's Liverpool F.C.; and driver Brad Keselowski. Visit https://www.rfkracing.com, become a fan on Facebook and Instagram, and follow on Twitter at @rfkracing.