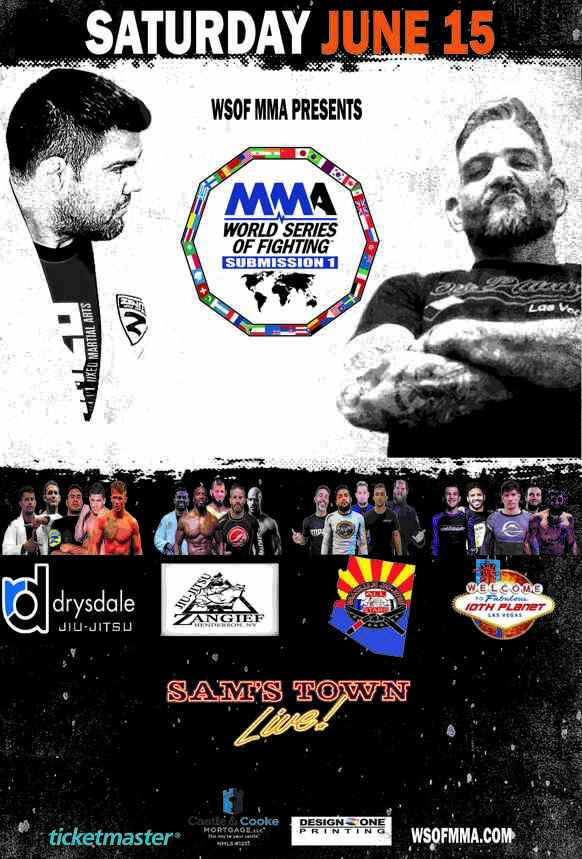 LAS VEGAS - May 20, 2019 - illiNews -- Shawn Wright, President of WSOF GC, expresses his gratitude in a statement, "We are overwhelmed with the amazing talent showing up to represent at our inaugural event "WSOF Submission 1."  The fundamental competition is strong at the highest levels of grappling to include jui-jitsu black belts, wrestling champs, and judo combat sport stars.  Everything goes with the exception of striking.  This definitely sets the bar high for our regional, national and global series."

When asked "What the motivation was for WSOF-GC to launch a Grappling series?", Shawn stated "We have always been a fan of the art from inception.  Whereas, weight is not the defining factor the outcomes can be very surprising and strategy prevails over size.  We have four 5-man teams of pure talent training for this night and the battle is real!  Team based fights leading up to head to head combat is sure to keep the fans entertained.

More on illi News
Team 10th Planet" out of Las Vegas is being coached by the amazingly talented Casey Halstead who comes to battle with "The Beast" Kyle Boehm, and the highly talented Keith Krikorian, Ruben Rivera, Andy "night night" Varela, and Sid Skrob aka Sid Vicious.

Team Arizona BJJ Allstars is showing up and showing out with Corey Mullis aka Professor Mullis who will captain and participate!  His warriors consist of Michael Currier, Jonathan Daniel Caraveo, relentless Austin Baker, and Tyson Antillon from Legion MMA out of Phoenix.

Last but not least we have "Team Zangief" representing Henderson, Nevada.  The captain is none other than Gabriel Barbosa Checca and he brings serious competition with the likes of Paul Schon, "world renowned" Kit Dale, Moises Antonio Lopez aka Honey Badger, and UFC/Bellator Veteran King Kevin Casey.

World Series of Fighting also boasts a video library of over 600 MMA videos from dozens of organizations on six continents. You can watch all of these events via our website at www.WSOFmma.com, via our Vimeo page: WSOF Global, or on our Roku channel: WSOF Global!