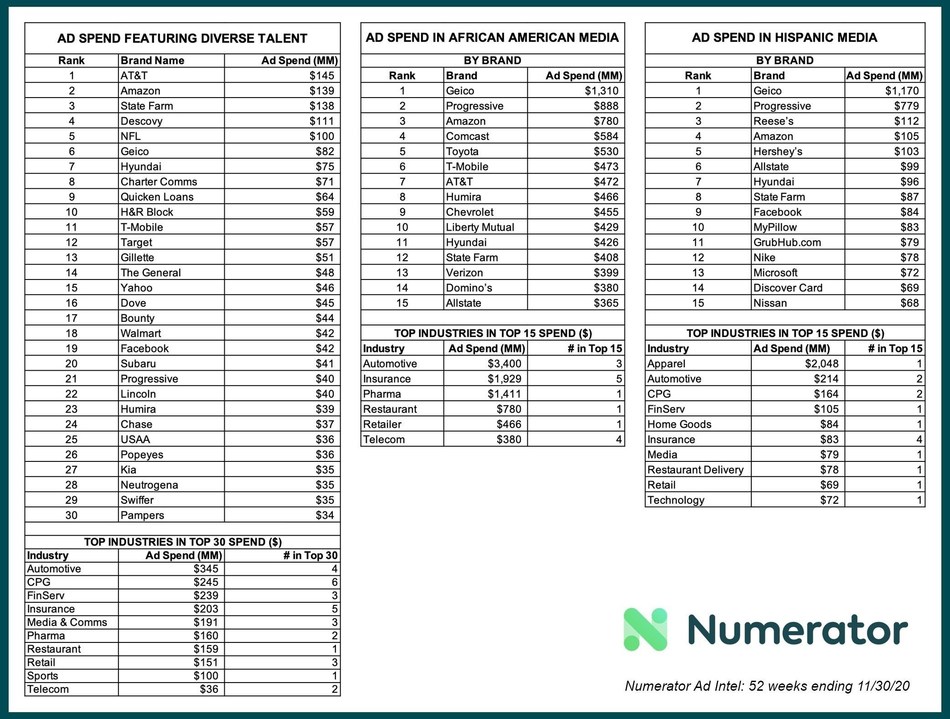 CHICAGO, Jan. 13, 2021 /PRNewswire/ -- Numerator, a data and tech company serving the market research industry, has released three reports quantifying brand spend in Black / African American media, Hispanic media and in ads with Black / African American talent. Analysis indicates that the insurance sector leads in spend in all three areas. Amazon is the only company to make the top five of all three lists, although Geico follows closely.

Numerator People Insights data, collected through MicroSurveys in Numerator's consumer app, shows that Black / African American consumers are not only more likely to be aware of a brand's values, they are also more likely to say a brand's values are important when making a purchase. And while 16% of all consumers say a brand's commitment to diversity, equality, and social justice is important when they make a purchase decision, that number is nearly double for Black / African American consumers (31%).


This analysis captures media spend across 24 paid media channels for the 12 months ending 11/30/20. Key findings of the detailed charts include:

About Numerator
Numerator is a data and tech company serving the market research space. Headquartered in Chicago, IL, Numerator has more than 2,000 employees worldwide. The company blends proprietary data with advanced technology to create unique insights for the market research industry that has been slow to change. The majority of Fortune 100 companies are Numerator clients.